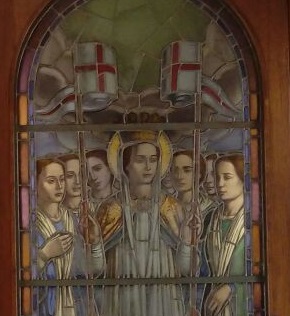 For centuries, St Ursula had been associated with many educational institutions and was a very popular saint. St Ursula has been painted by many a great artist.

Who was St Ursula?

Historical evidence for the particular individual behind the legend of St Ursula is lacking, or at least inconclusive. But the legend of St Ursula and her 11,000 companions draws from historical cemeteries in Cologne and centuries of veneration by Christians. It is a story of a princess from Anglia who undertakes a pilgrimage to Rome prior to entering an arranged marriage with a prince from a neighbouring Kingdom. She is accompanied by a large number of female companions. En route they are all martyred by the Huns at Colgone.

Depictions of St Ursula often have her in a boat with her companions symbolising, that under her protection and intercession, we will find our way safely into the harbour of God. Other depictions image her with a large protective mantle under which her companions are enfolded. But these latter depictions also typically have all the heads on the same level. St Ursula is never depicted as "lording it over" those she leads and guides. Likewise, for St Angela, members are to have a profound respect for the dignity of each one, and leadership is an act of service:

"Learn from our Lord who, while he was in this world, was as a servant, obeying the Eternal Father even unto death. And this is why he says:'Ego fui in vobis  no tamquam qui recumbit, sed ut qui ministrat'; that is, I have been among you not as the one who is served, but as the one who serves." (St Angela Merici, First Counsel)

The feast day of St Ursula is the 21st October. While no longer included in the universal Roman Calendar, her feast day is still celebrated by Ursulines and schools bearing her name throughout the world. In our contemporary context, St Ursula and her companions can stand to remind us of all the mass graves of unknown women raped and murdered throughout the centuries in crimes of war, genocide and ethnic cleansing. Every one of these women have their own story. Let not these stories be dismissed for want of particular identification. May their courage always inspire.